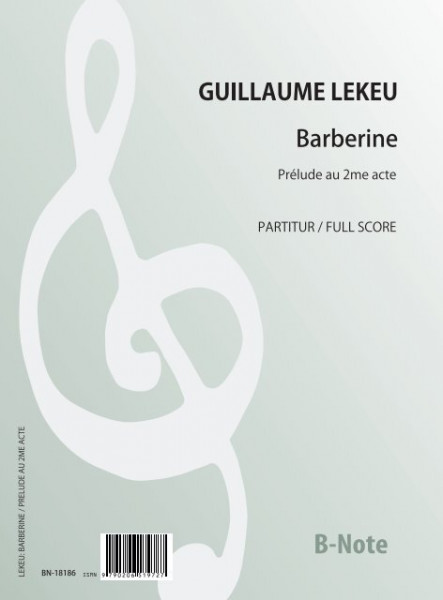 When Guillaume Lekeu is spoken of, it is usually with great regret. The Belgian late Romantic was only 24 years old when he died, but nevertheless left behind a considerable oeuvre that gave rise to the greatest hopes for many – which Lekeu was naturally no longer able to fulfil by his death. He was born in 1870 in Heusy, today a district of the city of Verviers to the east of Liège. His life ended in Paris in January 1894 after a typhoid infection, which probably resulted from eating a sorbet prepared with unpurified water with friends. The fact that several thousand people followed the coffin during the funeral march to the cemetery shows the reputation Guillaume Lekeu enjoyed despite his short career as a composer – not only in his Belgian homeland, but also in Paris, which was as challenging as it was snobbish.

He could have been the second innovator of French music alongside Debussy; he could have been an epigone and transformer of César Franck; he could have significantly developed the Belgian voice that was developing in his time between the great musical powers of France and Germany: All this was attributed to Lekeu after his death. All this, however, remains speculation. It is difficult to say in which direction Lekeu would have developed further, if only because his early works are stylistically of such great variety. It testifies to a creative spirit which, although it had its own language early on, could speak it in many dialects and which explored itself out in diverse constellations. Lekeu was considered curious and devoted to both the new and the old. In the old, he revered the over-father Beethoven, whom he called "God"; in the new, he revered Wagner, the king of the stage, who was very much in the limelight at the time.

Many compositions can be linked to Lekeu's biographical experiences. A visit to Bayreuth in 1889 completely electrified the 19-year-old. "I feel that the master of Bayreuth weighs on my mind with all his wonderful power," he wrote in a letter to his mother. Lekeu Lekeu had long been enthusiastic about Wagner. But the confrontation with the elaborate stage magic in the Franconian festival theatre must have triggered total euphoria. Not only that: from now on, Lekeu was on the lookout for dramatic material. After years of composing mainly chamber music, he wanted to move on to the big dramatic form.

Shortly after his visit to Bayreuth, Lekeu became a private pupil of César Franck. It was in this first year at school that he encountered the two-act drama Barberine by Alfred de Musset, one of the great French Romantics.

In a decidedly campy style, it is set in 15th century Hungary about the impoverished Count Ulric, who has to leave his wife Barberine to earn money. Rosenberg, a friend of his, is sure that Barberine will be unfaithful to Ulric. Ulric rejects this and makes a bet with him: If Rosenberg succeeds in seducing Barberine, Ulric will lose his entire fortune to him. If he does not succeed, Ulric will get Rosenberg's possessions. The end is unsurprising: Barberine rejects Rosenberg, and brings him under control with a ruse. Ulric has won the wager and overcome his poverty.

For Lekeu, the knightly saga (which is miles away in quality from Wagner's opera texts) is the perfect material. Before there is a libretto, he begins composing the first sketches for the piece that is obviously central to him: the prelude to the second act. He is concerned here with the core of love: with " ... the gentleness of Barberine, her honest goodness, her love and her devotion to her husband", as he notes in a letter. He showed the sketches for the Prélude to his teacher César Franck. Franck is said to have been quite taken with the piece, but he advised Lekeu not to orchestrate it himself. Lekeu nevertheless completed the prelude – and it was to remain the only 128 bars of an opera that was otherwise never composed. Alfred de Musset's sister forbade Lekeu to set the work to music. Although the copyright terms, which were short at the time, had long since expired (Musset had died 32 years earlier) and he could have freely used the "Barberine", Lekeu refrained from composing the opera. Nevertheless, the Prélude to Act 2 of "Barberine" was premiered in Verviers on 13 April 1890 and was a respected success.

César Franck may have been right in his assessment that Lekeu should not yet compose for orchestra. In fact, the instrumentation is often woodcut-like and not very imaginative – especially when one considers how stylistically influential the French orchestration school, shortly before Ravel and Debussy, actually was at the time. Lekeu's role model Wagner also had considerably more refinement. But that is only a technical aspect.

"Barberine" is nevertheless a remarkable work. It is music felt from the deepest soul by a young composer who had already found his musical language. Everything about this piece carries meaning and feeling, including much of a melancholy that almost all of Lekeu's works carry.

Even if at first glance the score seems to contain a lot of cliché, these passages are also original, genuine and highly effective. The bare beginning concentrated on the high strings, the calm flow of the music towards the hymnal, broken only by the minor counter-theme that may express the doubt of love, at the end the triumph of certainty: there is no question that Lekeu has summarised the theme of the attempted, yet eternal love of two people in his own way into a magnificent tone poem that can still stand up in concert. And not only there, by the way. The Barberine Prelude has been used several times as film music, most recently as the only music for Bruno Dumont's film grotesque "Ma Loute" (english title "Slack Bay"), which is well worth seeing.

The editor is pleased to publish this remarkable piece in a fresh edition – and for the first time ever professionally engraved. The source was Guillaume Lekeu's score manuscript, which, however, contained numerous music-grammatical errors and inconsistencies, and orchestral parts copied from it by another hand. All discrepancies could be eliminated by editorial corrections, comparisons between similar sequences and comparisons between score and materials. Therefore, a critical report can be dispensed with.