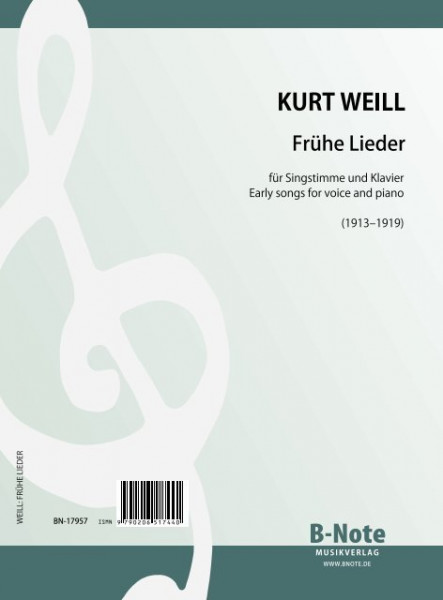 Kurt Weill's listeners are used to his very specific, elaborate sound. He is the musical voice of Berlin in the twenties and New York in the late forties. He left his mark on popular music theatre here and there; in Berlin, together with Bertold Brecht, he created a new style that included several conscious departures from traditional musical traditions. It is obvious that Weill must have started out quite differently. But how did he do it? These songs can provide answers. They were written between 1913 (when Kurt Weill was 13 years old) and 1919 (when he had just begun his music studies in Berlin). Five songs, six years - the works show an astonishing development from the rather simple and frolicsome- conventional "Reiterlied" to the ghostly "Stille Stadt" with its already pioneering harmonies at the beginning of modernism. The talent for melody and rhythm in the art song is already present in all these early titles, and his predilection for certain twists is also recognisable, for example when he plays around the "Vaterland" (fatherland) in the first song with the national anthem "Kaiserlied" in the left hand.

We are delighted to be able to present these songs, all of which are ready for concert, in engraved sheet music for the first time. Until now, Weill's early works have been treated utterly novercally by the rights holders. Up to now, these early songs were only available at the highest prices, but in partly illegible script copies, partly even in ancient german Suetterlin script. Performing music from them was only possible with great difficulty, if at all. This edition is intended to change that. It is based on Weill's manuscripts and copies thereof.

If you are interested in Weill's earlier songs, we recommend our new edition of "Ofrah's Songs".