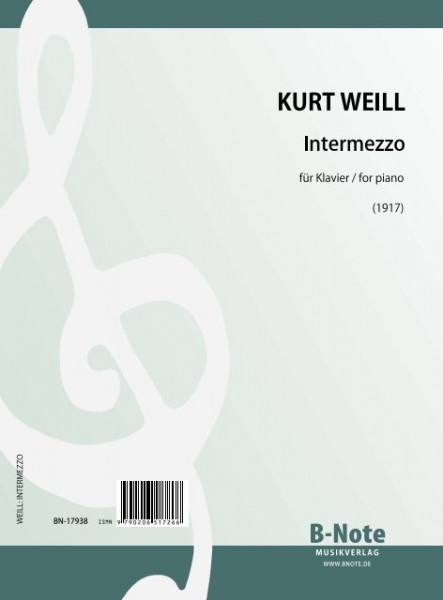 Kurt Weill is best known for his Berlin stage music, from „The Threepenny Opera“ to „Mahagony“, and for the Broadway musicals he composed with growing success after his emigration to the USA. Long after his death, his instrumental works were also played more and more frequently, such as his symphonies or the late-published cello sonata. He left behind just one work for the genre in which most composers have been active for centuries: solo piano. Although he himself began playing the piano at an early age and it was his main working tool throughout his life, he obviously did not care too much for piano music.

The present Intermezzo is that one work. Weill wrote it at the age of 17 (according to the sources for a chamber music concert in which he himself was to participate) - and it sounds just as youthful and voluptuous. Similar to „Ofrah’s Songs“ (1916, BN-17923), storm and stress reign here. We can hear that the young man from Dessau was much preoccupied with Brahms and Wagner at this time. But the certain twist of the later Weill can already be heard in many bars.