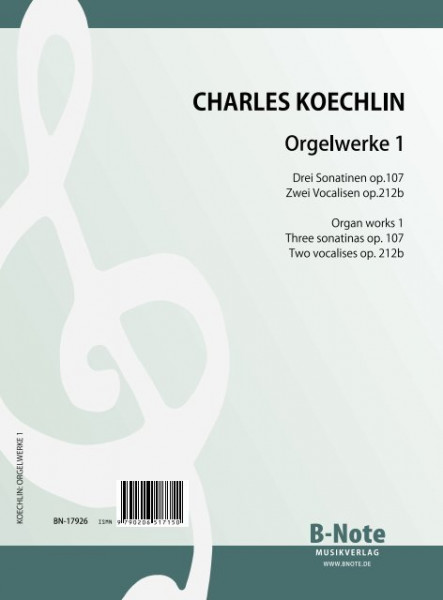 Charles Koechlin was, in general, a remarkable man: a failed engineer from an exciting family of inventors, artists, and entrepreneurs, a humanist and philosopher, a free thinker - and finally a musician and composer. Today musicology agrees that Koechlin is an underrated personality, even if his works have appeared more frequently in concerts since the 1980s and many are published for the first time.

Koechlin's compositions are as complex as his life and probably his character. They are difficult to grasp; there is no categorization for them, they fluctuate through the whole breadth of styles from archaic monodies to atonal symphonic works. The organ was certainly not Koechlin's main instrument, but he dedicated a number of works to it. But organists will instantly recognize that he was not really familiar with the instrument. The texture is often weird (and sometimes only playable after a revision), the registrations have a somewhat clumsy appearance.

But the works are worth it. The first look or the first try on the instrument may hardly make the interpreters fall in love with Koechlin. But if musicians get involved in the interpretation and understand the principles, they will discover a language that may be foreign first but highly exciting. Harmonics and melodies go strangely here and there, but everything meets with a surprising and engaging musical charm. You have to let this music flow. Its meaning and its aesthetics are behind the texture, which may seem clunky and irregular at first - but that's only on paper.

Koechlin wrote the second and third sonatinas in collaboration with Catherine Urner, who contributed several themes which Koechlin then elaborated. The two vocalises are Koechlin's own arrangements of two vocalises from op. 212, which were originally composed for violin and piano.