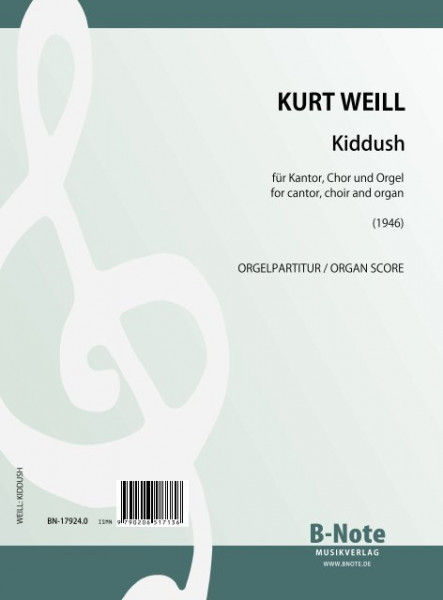 Kurt Weill was jewish and very familiar with jewish synagogue music: his father was a cantor at the synagogue in Weill’s hometown Dessau. The son took a different direction musically; he mainly worked as a stage composer. In 1935 he emigrated to the USA and was successful there on Broadway.

In 1943 David Putterman, cantor of New York’s Park Avenue Synagogue, approached Weill and commissioned a composition that was to be performed as part of a series of concerts to promote Jewish synagogue music. Putterman and Weill agreed on Kiddush as the textual basis. With this prayer, the Sabbath and the jewish holidays are introduced.

„Kiddush“ was performed for the first time in 1946 - it was and remained Kurt Weill’s only sacred work. He dedicated it to his father, the Jewish cantor. The work is considered to be the first synagogal composition to follow the modern American popular style. The composer Jack Gottlieb recognized the motet as „a fascinating amalgam of germanic stolidity, american blues, and Broadway pop harmony“. At the same time, especially in the middle section and in the treatment of the organ, there are clear references to European, especially French sacred music of the early modern period – perhaps a reminder of Weill’s stay in Paris, where he lived and worked for two years before emigrating to the USA.

„Kiddush“ is published in phonetic transcription of the original Hebrew text. The organ part is – contrary to the first edition – notated on three staves since the pedal is mandatory.